Being the Change – A Story of Return 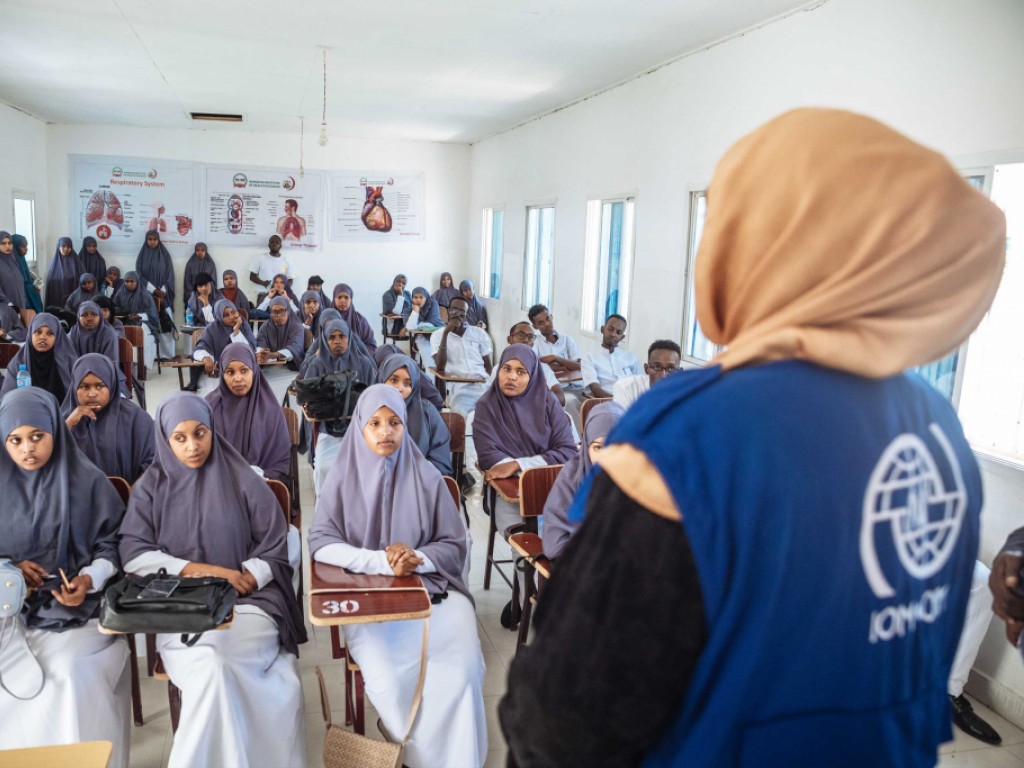 There are many expressions that try to capture the essence of inspired and inspiring people.
Even one person can make a lasting change.
The mighty oak once started as a seed.

The reality is that some people are born with a purpose, and an unquenchable need to leave a more positive and better community/country/world as a result of their life’s work. Somewhere and somehow we have all met one of these individuals and are left feeling inspired, encouraged and motivated to do more ourselves and be part of the change.

One of these bright lights and leaders in health education is Nimo Hussein, the current Director of the Hargeisa Institute of Health Sciences (HIOHS), and previous participant in the IOM MIDA FINNSOM programme (2015-2016) that assists highly skilled migrants to return home and transfer knowledge and build capacity in the areas of health and education.

According to Nimo, “I grew up in Hargeisa, where the need of female of health care professionals is critical because Somali women are the centre of the family so if you educate a woman, especially in the healthcare field you educate a village or city.” From a young age she always desired to become a healthcare professional and serve as a mentor to young females, “so they will follow in the footsteps of other women and have the courage to educate themselves. I believe more educated women could have a positive impact on their society.”

To fulfill this dream Nimo successful applied to college in Washington State, United States of America where she completed her health degrees from 2006-2012 (registered nurse, bachelor in nursing, master of nursing, and Post master education certificate in Infectious Diseases Infection Control (IDIC)). True to her character Nimo set off to the United States on her own saying that it gave her the chance to learn how to explore, support and live her life.

However, the transition from Hargeisa to Seattle, Washington wasn’t easy for Nimo. “It was a tough life to live due to the differences in language and culture and being of another colour and religion, but I had to overcome these challenges in order to live and educate myself. I learned that living in another country as an immigrant where almost everything is new to me such as language, weather, culture and the country was one of the greatest life experiences for me.”

Keep in mind that in Hargeisa it is dry, dusty with little rain for most of the year, while in Seattle it is rainy and wet most of the year. At the same time Hargeisa is a developing country with limited job opportunities for women, “although attendance of women in private schools has increased, many more women lack the opportunity to educate themselves due to financial limitations and family responsibilities, including starting families at a young age,” explains Nimo.

Nimo worked tirelessly building her skills and knowledge through her education, while never wavering in her role as a community health advocate, financing yearly medical missions back to Somaliland (2006-2014) to provide voluntary lectures, training and clinical skills to Hargeisa Group Hospital nurses, staff and University of Hargeisa School of Medicine.

It was during one of these missions that Nimo first met the MIDA FINNSOM team working at the Group Hospital (2012). “I worked with them as a volunteer which gave me courage that I could make some positive changes in my country. Then I became interested in to join the MIDA FINNSOM team. I applied to a lecturer expert position at the Hargeisa Institute of Health Sciences (HIOHS) posted in January 2014 and then successfully got the Job in January 2015,” she explains.

This was the start of an amazing and positive experience not only for Nimo but the broader health community in Hargeisa. In a relatively short timeframe she was able to create an instructional environment that increased the effectiveness of nursing and midwife practices of those working at Mother and Child Hospitals (MCHs), community centres and major hospitals. “This led to an increase in mother and child health and a decrease in mother child mortality rates and gave me recognition from the local community, government and Ministry of Health,” Nimo says.

“Health education is needed everywhere in any country and I believe that I never take off my hat of being a health professional but continue promote health and prevent disease whenever possible at the community level, hospital and community health centres.” – Nimo Hussein, Director HIOHS

By September 2015, following the noticeable positive changes that took place during her MIDA FINNSOM assignment, the Somaliland Minister of Health Appointed Nimo as Director of HIOHS.

This health facility was first established in 1930 and although it has a long history Nimo explains that there are still many differences between the health education environment in Somaliland with very basic teaching and learning resources available as opposed to the United States with advanced technology. She says, “I had to overcome many barriers and tried to teach what is available here rather than thinking back about the teaching system in the United States.”

As part of her role as Director, Nimo is responsible to serve as a health educator and leader to ensure that all students are supervised in a learning environment that meets the approved curricula and mission of the institute. There are roughly 250 students enrolled at HIOHS in various programmes including nursing, midwifery and lab technicians. Amazingly, 95% of students successfully graduate from HIOHS and go on to work at major hospitals, MCHs, and community health centres as employees or volunteers. The education of health workers is critically important has they have a direct impact on the health and wellbeing of any community.

Some may ask what drives Nimo to keep her forward momentum for change. For her it is through her everyday interactions with student nurses and midwives, the achievements she has made in the health teaching/learning environment, the strengthened clinical practices and the ability to take part in community health promotion, disease prevention through knowledge and increasing awareness via TV, radio and brochures.

So what is next for Nimo? She says there is still more work to do, “I would like to continue to take part in building the capacity of health systems in Somaliland and optimize clinical practices through more effective teaching, learning and health education strategies for safe patient care and clinical practices.” She is incredibly proud of the teachers and students at HIOHS and says that through her continued effort, “I won the students’ and teachers’ hearts and minds, which made me become part of the team and they are now devoted to providing care and teaching unconditionally.”

For other Somali professionals Nimo has this advice, “Somaliland is a developing country which needs its people for rebuilding, advising, mentoring and sharing expertise. I would highly recommend that they return home permanently or even temporarily and become part of the change. For me it is a rewarding job that motivated me to stay and connected me more to this country because I am a leader and role model for the younger generation especially those female nurses and midwifes in the field of health care.”

Thinking back on her journey, Nimo describes her experience as ‘a journey of a thousand miles that began with a single step.’ “The transition was a challenge! I was too scared and doubtful, a little bit disorganized in the beginning because of coming from an advanced technological education system versus basic or no technology available for teaching, yet I overcame these challenges and was able to teach with the basics and with very limited teaching resources. These challenges turned into gained knowledge and experiences for me, it enables me to work in a variety of clinical and classroom settings now. Now I continue to prepare more but I am never scared!”

Positive changes in the nursing programme:
- Increased the number of classrooms
- Increased the number of nurses and midwifes
- Increase number of intake and admission from every three years to yearly
- Strengthen clinical practice and theory in the classroom
- School policy in placed which applies to all departments
- Institute website under construction
- Effective group communication system (especially for students) through Facebook, WhatsApp, email and texting
- Increased professionalism, skills, behaviour and knowledge through education
- Understanding the importance of clean healthy teaching/learning environment; resulting in a green environment

Nimo Hussein assignment with the MIDA programme was possible thanks to the funding of the Ministry of Foreign Affairs of Finland.